The town of Pana is the central hub of Lake Atitlan as it has the main road access. It is a small town that has a central tourist area comprising of the street Calle Santander running from the centre down to the lake shore, and the ‘Zona Viva’, where the majority of bars, clubs, banks, and restaurants are.

Panajachel was believed to be founded around same time as Sololá and Santiago Atitlan, in 1547. The name comes from the Cakchiquel (one of the Mayan languages used around the Lake) meaning ‘place of cane and doctors’ (but not the certified kind of doctor!). Another explanation is that it refers to the fertility and abundance in plant life here, thanks to the rich volcanic soil.

At the end of the 17th Century there was a local Cakchiquel population of 800, in 1936 it was 1,200, and now it is approximated at 18,000, although there is a large, foreign and tourist population too, which swells in number considerably at certain times of year. It was in the 1960s that it began to become a popular tourist destination and ‘hippie’ hangout, being knicknamed, ‘Gringotenango’!

There are three main areas of the town with the central part, Barrio Norte to the north and over the San Francisco River, Jucanya. But all are close and within easy walking distance of central, ‘down town’ Pana. It has one of the largest ladino (Guatemalans of Spanish descent) populations around the lake, guessed to be around 75% indigenous and 25% ladino; whereas other villages around the lake are closer to 98% indigenous.

Tourism is the largest industry around the lake making up about 50% with agriculture being second at around 22%.

For visitors to Lake Atitlan this is generally your arrival and jumping off point as this is the transport and commercial hub for the whole Lake area. Here you will find all the grocery stores you might need, along with all banking requirements as very few villages around the lake have banks or even ATMs, though more are appearing. It has probably the best value for money shopping for souvenirs and tipica, all the mayan weavings, woodwork, beaded jewellery etc. There are a very interesting museum of artifacts found at the sunken, ancient Mayan village of Samabaj: Museo Lacustre. There are also a number of fair trade stores too.

Famous for the distinctive blue ‘traje’ that the women wear and still some men too. It is worth visiting to see a traditional lake-side village. Go to Villa Santa Catarina or Casa Palopo for lunch. Be sure to visit the small church too. We suggest that when visiting this church, as with any church or religious centre, that you are dressed respectfully.

This village is accessible by pick-up from the market area in Pana. The road is beautiful and can easily be walked too. About a half hour walk, and then walk back or hop on a pick-up back! 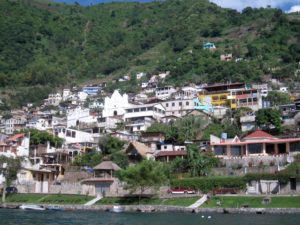 Famous for its beautiful ceramics, which are for sale all over the village. The old church is also interesting to pop into. This village is about 6 or so kilometres on from Santa Catarina. It again can be walked (about 2 hours from Pana), or just hop of pick-up from the market area of Pana.

Not much to see here and difficult to get to, although now, because the road is so bad, there is a public lancha, and there is a nice hotel for lunch, Hotel Toliman.

Famous for the home of ‘Maximon’ and you will be inundated with offers to take you there! It also has a great small, backstrap loom museum and a fair-trade store with high-end, high-quality accessories all made on the back strap loom, and run by the non-profit, the Cojolya Association of Maya Women Weavers. Two great places for lunch are the Posada Santiago and the Hotel Bambu. There is also a great cafe/bar called Quila. A number of NGOs are based here in Santiago, along with a fantastic hospital ‘Hospitalito’.

Generally a backpackers’ hang-out, but it has plenty of choices for eating and hanging-out in and is usually the easiest way to access San Juan, so you can visit both villages at once. It is easily accessible by boat both from Pana and Santiago Atitlan. 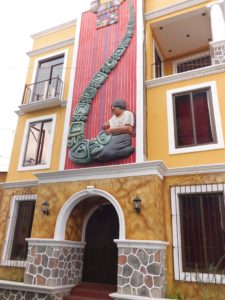 Probably the cleanest and prettiest of the lake-side villages, it is the home of many natural dye and artists cooperatives. You can visit some of them and have a demonstration. There is also an interesting coffee tour here, and if you are feeling very energetic you can hike up to the Indian’s Nose through the nature preserve out on the road towards San Pablo/San Marcos. (See La ComUnidad K’em Ajachel above for tours.) If you like wine and cheese, be sure to go the Artesan Cafe just round the corner from the market – excellent place!

This is the spiritual center of the lake, with just about every alternative type of therapy on offer. San Marcos is one of the most popular villages around the lake to visit and for foreigners to live. It is known as the holistic centre of Lake Atitlan. Here you can find a mutlitude of alternative therapy centres, massage therapist, as well as meditation and yoga centres. People come from all over the world to get treatments here and attend courses. It also boasts a wonderful array of restaurants, bars and cafes offering good food and company. San Marcos is mainly accessed by boats (lanchas) that plough back and forth regularly along the north shore approx. every 20 mins from 6am-5pm. It is about a 30 min ride to Pana. 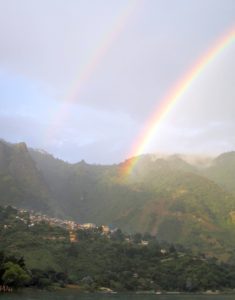 Santa Cruz under a double rainbow

This is the closest villages to Pana (only 10-20 mins) and also one of the most popular to visit and also for foreigners to choose to build or buy their dream home! It boasts some of the very best views of the Lake and sitting looking out over the lake you get an almost 180 degree view of the lake from the sunrises in the East to the Xocomil (afternoon wind) whipping up white horses on the lake from Santiago (directly opposite), the three ever-present volcanoes, and finally to some of the most spectacular and varied of sunsets to the West!

The Mayan village is set up a steep road (about a 20 min walk) where it is well worth going to visit the vocation centre of CECAP, set up by the local NGO, Amigos de Santa Cruz. There is a good cafe here with some amazing views. Along the shore line of Sta Cruz is where you will find a variety of hotesl with restaurants and the homes of many resident foreigners.