The Winds of Change: Day of the Dead & the start of the Dry Season

Puffy, cotton-wool clouds skim across the blue sky. If you look carefully you can catch little blotches of colour scattered like large drops of rain throughout the sky – until you look closer that is. At first they look like plastic bags or paper floating in the wind; squinting you can see long, flapping tendrils and circular shapes darting back and forth, chased by the tendrils. A closer inspection reveals a line of string attached; running an eye along the string it ends in the clasped hand of a child tweaking it to keep the coloured, hand-made kite up in the air and encouraging it to go higher and higher – Kite-flying time has arrived.

Every year, towards the end of October, the winds pick up right across Guatemala marking the end of the rainy season and the beginning of the dry. The winds whip up the clouds and the humidity, and finally whistle through the country bringing with it the dry, cooler air.

A big celebration at this time is the Day of the Dead on 1st November. Cemeteries around the country get cleaned up and a new lick of paint ready for the arrival of all the family to picnic on the graves, bringing with them flowers and food to share with their ancestors and lost love ones, and celebrate their lives. It is a big community activity and the atmosphere is always festive and happy rather than sombre, as one might expect! 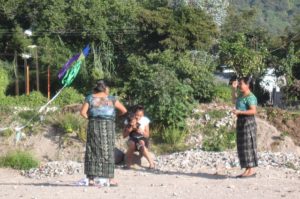 One of the local traditions (a mix of Catholic and Mayan) that compliments this, and has been going on decades, is the making of elaborate and ornate paper and bamboo kites to fly over the graves. The exact origin of this tradition is not certain: perhaps it is a way for spirits to be connected the Mother Earth and their relatives; or, it is a symbolic, spiritual act so that the spirits may travel along the string to the ground to visit their families and then return heavenwards. Alternatively, messages are carried skywards by the kites. Yet another theory was that the kites (barriletes, as they are known in Guatemala) were flown to keep evil spirits away. It seems that it may have developed from children being given kites to entertain themselves, while their families attended the grave-side celebrations.

In the towns of Santiago Sacatepéquez and Sumpango, lying between Antigua and Lake Atitlan in the Highlands of Guatemala, this simple cultural tradition turned into a public event some 100 years ago and is now a huge international event, attracting not only Guatemalans but tourists from all over the world. 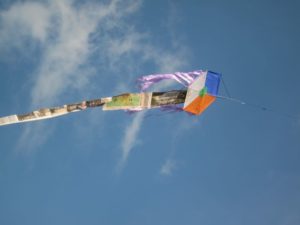 Here there are kites unlike any others; giant circular or octagonal kites of up to 8 metres in diameter, all carefully constructed from a bamboo frame and tissue paper stuck together in intricate and colourful designs. They take literally weeks to make and are stood up in a huge field near to the cemeteries in these villages on the 1st of November. Here they are exhibited, and then as the afternoon wind pick up, a competition begins, to try and fly these vast, awkward, but very delicate paper constructions, with prizes going to those who are able to keep them up in the air the longest. Instead of a small child at the end of a piece of string, thick ropes are held by up to a dozen men!

It is the days running up to the Day of Dead that the whole country becomes alive with kite making and flying. Small children work hard making improvised mini kites made out of sticks, coloured plastic bags, tissue paper and newspaper. In Panajachel alongside the river running down in to Lake Atitlan dozens of children jostle to get their kite up the highest in the late afternoon, late October winds.

As the rainy season draws to an end, the winds will calm, but little reminders of the Day of the Dead and kite season will be left everywhere in the form of kites and bits of kits entangled in telephone and electric cables.

WISHING EVERYONE A VERY HAPPY NEW YEAR and ALL THE VERY BEST FOR 2022!